A Remarkable Partnership Agreement Between UoD and Thomson Reuters 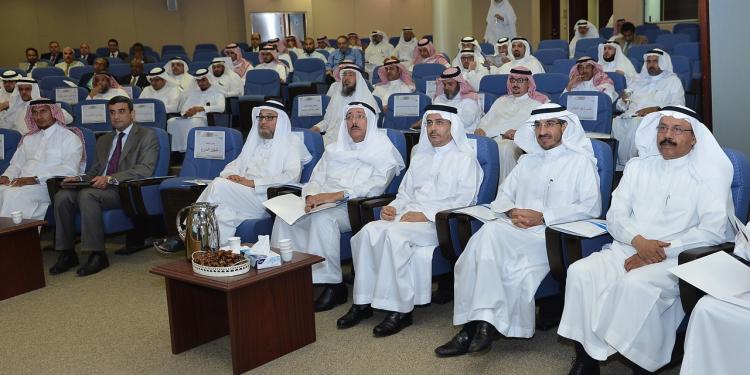 “This agreement will provide UoD with a global presence and will strengthen the bonds between both parties in order to establish a higher knowledge of scientific research.”

A historic five-year strategic partnership between the University of Dammam and Thomson Reuters was recently established during a one day, widely attended, workshop at UoD’s Research and Consultation Center.  Dr. Abdullah M. Al Rubaish, the University’s President was in attendance along with Dr. Abdulsalam Al Sulaiman, the Vice President of Postgraduate Studies and Scientific Research, who represented the University in these proceedings.

The President of the University, Dr. Abdullah M. Al Rubaish stated that, "This strategic partnership will reflect positively on the rating process of the University and on its position in global scientific search engines.   One of the major outcomes of this partnership will be that it will align the strategies of UD’s scientific research with international standards. Therefore, the University will gain scientific prominence on a global level.”  He also noted, “The number of scientific publications connected with UoD was almost 2000, up from a mere 450 not too long ago, which is a remarkable achievement."

Dr. Al Rubaish added that, "Another positive result of this agreement is that it will help in promoting international affiliations between UoD faculty members.  The names of faculty will now appear next to the University of Dammam and this will give them a global exposure through global databases that will enhance their academic reputations from a regional one to an international one.”

The Vice President of Postgraduate Studies and Scientific Research, Dr. Abdulsalam Al Sulaiman, described the conference, stating that, "This workshop targeted four levels.  Level one focused on university leaders, including:  deans, vice deans and chairs of academic departments. The second level consisted of faculty members and researchers. The third level focused on graduate and undergraduate students and finally, the fourth level concentrated on technicians and support staff.  The main focus of the workshop was on knowledge and scientific research, focusing on: planning, goal setting: either general or specific, specifying a vision and the ways to achieve it and how to reevaluate and assess the vision in case it was not achieved. The strategies developed in this workshop for both departments and colleges will complement and support the University's plan and in turn the University's plan will complement Afaq's Educational Plan along with King Abdulaziz's City for Science and Technology’s Maarifa 2."

Dr. Al Sulaiman added,  “This plan will establish the knowledge base for scientific research for technicians and researchers in order for them to fully understand the value of scientific research and its vital relationship with the needs of the community.  The plan will also help them make the transition from research to publishing, implementing inventions as well as patents for profitable economic projects that will contribute to launching new job opportunities.   This is known as: economic knowledge, which all the research entities in the Kingdom as well as abroad aspire to and is evident by the growing number of universities, the increase in patent applications and the establishment of numerous research centers. The formula for this is straightforward, create and establish viable research, then transform this research into an equally viable economic project and then promote this project internationally either through publications, inventions or creations that can be incorporated in leading businesses or economic projects that will benefit the Kingdom.”

Dr. Al Sulaiman continued, ‘When we originally entered into this partnership with Thomson Reuters we noticed that it would be a strong alliance both locally and internationally. We discovered through research and consultations that Thomson Reuters commands the worldwide web for education and for this reason we have agreed to a five year strategic partnership with Thomson Reuters, beginning with our first workshop on March, 31, 2015.  These workshops will continue approximately every three months, with a total of 54 intensive workshops in total over the course of the partnership and supervised by the president of the University of Dammam, Dr. Abdullah M. Al Rubaish.”