HRDF exhibits the National Observatory of Labor's Objectives in IAU 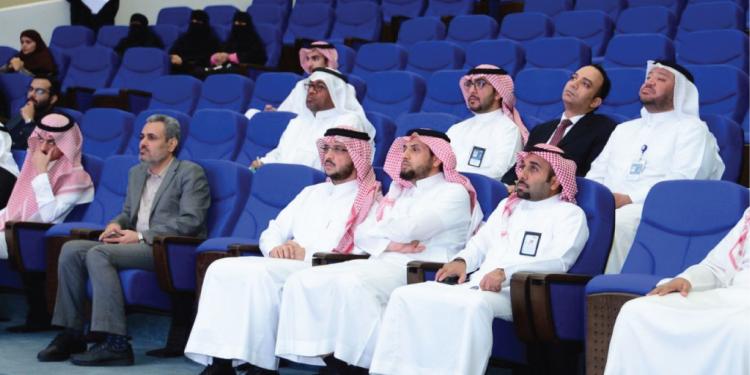 Imam Abdulrahman bin Faisal University hosted a workshop for officials from the Human Resources Development Fund to introduce the National Observatory of Labor's objectives. The workshop was attended by the Vice-president for Academic Affairs Dr. Ghazi Al Otaibi and the General Director of the Public Relations and Media Eng. Tufail Al-Yousef. The Director of the Eastern Province’s HRDF Branch Abdulaziz Al Yousif spoke about the objectives of the National Observatory of Labor and its role in assisting governmental agencies such as universities in human resource planning and decision making based on accurate data for the society’s needs of different specializations.

The director of the Alumni and Career Development Center in IAU, Dr. Amany Al Bahr welcomed the HRDF’s officials and thanked them for responding to IAU’s invitation. She pointed out that the Alumni and Career Development Center’s objectives are in line with the HRDF’s objectives to contribute to the optimum planning for Human Recourses and to support in employing IAU’s alumni. These objectives are also aligned with the Kingdom’s 2030 Vision.

Dr. Al Bahr indicated that “the center seeks to develop student skills even after they graduate by various methods such as introducing curriculums and workshops that serve them in applying to the job market. The center reaches out to IAU’s alumni through several channels such as E-mail, the center’s telephone and social media platforms.

HRDF Eastern Province’s Director Abdulaziz Al Yousif mentioned that “the National Observatory of Labor assists the University and other academic and governmental agencies in planning for academic studies through providing indicators concerning graduates’ tendencies in the job market in addition to determining the job market’s needs.

Al Yousif declared that “the National Observatory of Labor provides documented data and information from ministries and governmental agencies and it has 35 main indicators, a number of sub-indicators and reports that display data from different governmental agencies concerning graduates and the job positions they have gained as well as that, the indicators display the 2018 job market data as an example.