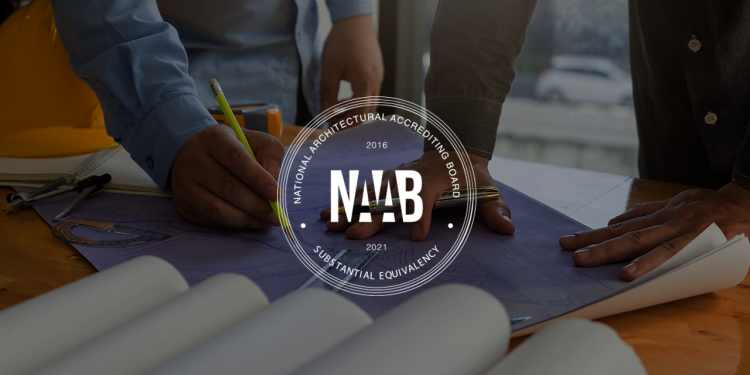 The Architecture Program in IAU Achieves the Substantial Equivalency from the NAAB for 6 unconditioned years. The process started from the first semester of 2012 with preparing documents and required forms, collecting data, statistics, facts and evidence that were required by the National Architectural Accreditation Board and that was after receiving the acceptance of the administration of the University then the Accreditation request was sent out on May 25, 2012 and the request was accepted by the NAAB Council and the first visit was scheduled.

Dr. Abdulsalam Al Sudairi, Dean of the College of Architecture and Planning stated that "Academic Accreditation is considered a strategic plan that Saudi universities seek to achieve required quality standards in the fields of education and scientific research in comparison with other local, regional and international universities. And because the College of Architecture and Planning in IAU is considered the first of its kind in the Kingdom therefore the University has been seeking to achieve an accreditation that befits the legacy of the College and will fulfill the expectations of the administration, the students and the faculty members therefore, the Substantial Equivalency Accreditation was chosen.

The NAAB evaluates Architectural programs in colleges and universities throughout the United States of America and it cooperates with other Architectural agencies in the American Institute of Architects (AIA) such as the National Council of Architectural Registration Boards (NCARB) and the Association of Collegiate Schools of Architecture (ACSA).

The Substantial Equivalency Award is presented to Architectural programs in colleges and universities outside of the United States and it is equivalent to other accreditations but it takes cultural, licensing system differences and environmental organizations into consideration.

Faculty members started working to upgrade and develop the Architectural program during the Board's visitation and they reorganized the program to fit the style, terms and procedures of the approved programs in the United States of America. The working process started from the first semester of 2012 with preparation of documents, required forms, collecting data, statistics, facts and evidence then the first visit was scheduled.

Years of group work between University administration, the deanship in the college, faculty members and students payed off by receiving the approval of the visiting Board. The evaluation indicated that the college achieved all the elements except three that were partially achieved from more than 32 of the Academic Accreditation Standards. The report mentioned that 7 standards received a degree of excellence which is rare and distinctive and only a few of American universities received these grades. Also, all the administrative standards were achieved, the third report was a detailed report regarding the developments that were added to the program and it praise the University as an excellent Academic foundation.