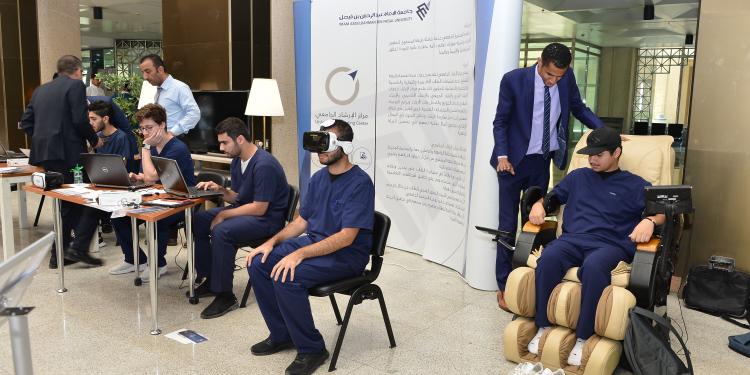 IAU Counseling Center activated “World Mental Health Day", to be on the 10th  of October annually. The center provided several services to students and university employees in the lobby of the health colleges through an exhibition of awareness messages and media articles.

The Director of the Center, Dr. Abeer bint Ali Al-Rasheed, stated that the celebration of this World Day aims to raise awareness with the importance of mental health among individuals, because mental health goes beyond the issue of treating disorders seeking to achieve happiness, psychological well-being, and enjoyment with quality of life. From this point of view and per activating the role of the center as an academic psychological entity, this world day was activated today with an exhibition presents the services provided to the university’s employees, including students, faculty members, and employees, including awareness services, tests, whether academic, psychological, or social, beside use of stress levels devices.

Dr. added. Al-Rasheed that when the student has a high awareness of the importance of mental health, will seek the services of the center, which will certainly provide the necessary service in top confidentiality by skilled specialists. Thus, the student quality of life will be raises along with academic performance too.

Dr. Abeer pointed out that “In many of the academic problems facing us, we find  the main aspect is psychological, not academic, and more the student has a high awareness of mental health, the more aspects of his life, whether psychological, academic, social or family, will be straightened”. This why she sees that mental health is not something to mention it one day per year, but it is an ongoing daily matter that deserves attention and follow-up. Adding that we must strengthen this day so that individuals are encouraged to seek the services of the center, as many of them are reluctant to do so believing that the center is only intended for those with severe mental disorder, and this perception is not true. The center provides psychological services at all levels, and for all students, university employees and their families. We wish everyone a good and to make use of the services provided by the center.

Al-Rasheed also explained that the center holds many interactive workshops and training courses to students where beneficiaries has reached large numbers that exceeded thousands. The center activities included workshops about smoking where the collective counseling became a contributor and motivator for them to get rid of this reprehensible behavioral habit.

Dr. Abeer Rashid praised the great role played by the Student Council of each college, as they were informed of the services provided, such as tests, measurements, and a relaxation chair. They transferred the services of the center to their colleagues in Rakah campus as well as in female students’ departments at the University’s branch in Al Rayyan.