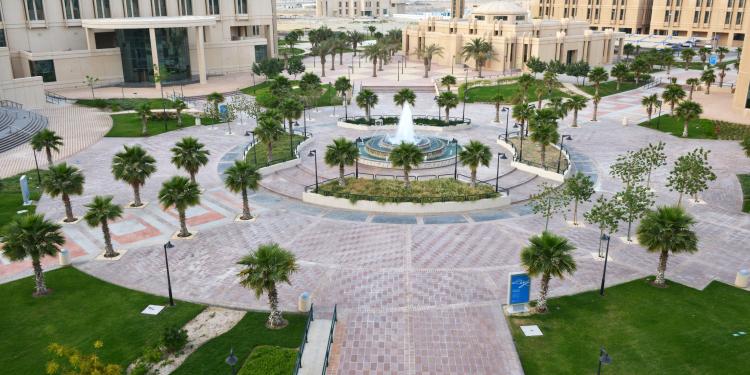 Under the auspices of Her Royal Highness Princess Abeer bint Faisal bin Turki Al Saud, Chairperson of the Eastern Province Council of Social Responsibility, the College of Applied Studies and Community Service celebrated on Wednesday evening, Dhu Qaddah 16, 1443 AH, June 15, 2022, the graduation of the fifth class of the Orphan Mothers Empowerment Program “Tamkeen”, held in partnership with the Charitable Society for Orphans Care in the Eastern Province (Benaa).

The ceremony was inaugurated by the national anthem, followed by a parade of the program's 29 graduates. The graduates marched through the audience, wearing gowns and stoles, with sentiments of delight and satisfaction, to the melody of a specially composed song with the names of all grads.

The audience were welcomed with poetry, followed by a welcome speech by the organizer of the ceremony, Masheal Surnaj Alenazy, followed by verses from Quraan. Then an induction video of “Tamkeen 5” was displayed showing the vision, message, and the goals for which the program was set.

As we are in an era that Saudi women have a place and a role in leading society under the Custodian of the Two Holy Mosques, King Salman bin Abdul-Aziz and His Excellency Prince Mohammed bin Salman, Vice President for Development and Community Partnership, Dr. Nuhad Abdullah Al- Omair, expressed this to the mothers and stressed the importance of such programs for women's empowerment.

She was followed by Her Excellency the Vice Dean of Applied Studies and Community Service and Executive Director of the program, Dr. Suhailah Saud Al-Jameel, who noted that this program was aimed at empowering this precious group and in support of opening the horizon for their natural role towards their children, especially as they became the source of motherly and parental affection at the same time. Dr. Suhailah also emphasized the College's desire to make the program comprehensive and balanced to meet the personal, educational, and family needs of beneficiaries and acquires managerial, economic, and professional skills that enable them to raise their children properly and can advance them in the face of the challenges of life. Dr. Suhailah also outlined the development of the program, which began with the development of a clear vision and message, and specific objectives from which the program will move towards success, ending with many leisure trips, enrichment meetings, before and after questionnaires for development and sustainability.

In conclusion, Dr. Suhailah thanked all who supported the program from the university administration, the charity and all the staff of the college and the charity who spared no effort in preparing and equipping to produce this developed version in the best picture.

A video speech was then presented to His Excellency the Dean of the Faculty and the Secretary- General of the program, Dr. Khaled Hassan Alshehri, in which he praised the excellence of the program not only at the university level, but at the regional level. The Vice Dean for Studies, Development and Community Service and Deputy Secretary-General of the Program, Dr. Adel Abdulmohsen Al-Dhuwaihi, in his recorded speech, congratulated the female graduates, and considered this occasion to be one of the University's proud events.

This was followed by a visual presentation entitled "Moments... giving and the impact... " The Program’s activities and the enriching meetings in this edition were reviewed, at which a group of mothers expressed their thanks and gratitude for the program and the considerable transformation of their lives, their children's lives and its impact on their personalities and on those around them.

Mrs. Hanouf Al-Khaldi read a statement on behalf of His Excellency Mr. Abdullah Rashid Al-Khaldi, expressing the Charity's pride in the services it offers to orphans and their mothers in the Eastern Province. She praised the program's fifth edition's paradigm shift and congratulated Imam Abdulrahman bin Faisal University's represented by the College of Applied Studies and Community Service for their efforts and enthusiasm. She expressed gratitude to the Charity's and College's trainers and staff.

The mothers’ families had a share of the ceremony’s segments, where they congratulated the graduates and expressed their enthusiasm through a visual broadcast at the event. Dr. Azhar Saeed Alhammali, the program's Deputy Executive Director, offered a message of thanks to the program's trainers who aided in achieving the goals.

This was followed by honoring the sponsors and success partners by handing them commemorative shields for their effective contribution to the success of the ceremony. After which the graduates were honored. Following that, the graduates were acknowledged. Ms. Thuraya Mufarah Al Khaldi, the college's program coordinator, recited their names as they were presented with graduation certificates, gifts and souvenirs,  as a tribute to their achievement, this was followed by dinner.

Deans and Vice Deans from the University were in attendance, as were many members of the Charity “Banaa” and Trainers of the programmed from both inside and outside the College, as well as the families of the graduates.