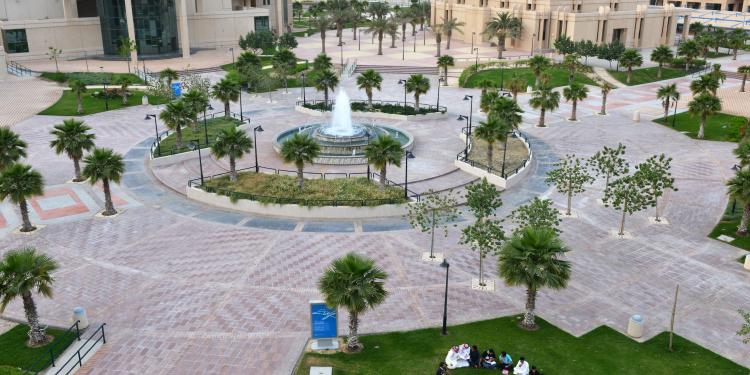 Building individuals and the progress of societies are of the main objectives that the council moves at a steady pace to achieve, as well as its vision to consistently keep up with the trends of leaders and rulers in order to achieve Vision 2030, Princess Abeer Bint Faisal stated.

Her Royal Highness Princess Abeer Bint Faisal Bin Turki, Chairperson of the Board of Trustees of the Eastern Province Council for Social Responsibility has signed Memorandum of Understanding (MOU) with the President of Imam Abdulrahman Bin Faisal University (IAU) Dr.Abdulla Bin Muhammad Al-Rubaish on Tuesday 3/6/1441H at the university in Dammam.

The MOU has been signed in the presence of the Council's Secretary-General Luluwa Al-Shemri, the Executive-Director Nouf Al-m'ejal, Ms.Reem Al-Zaid, Mr.Ibrahim Al-Moutawa, IAU's Vice-President for Student Affairs Prof.Dalal Bint Muhammad Al-Tamimi, Dr.Awatif Bint Nafe' Al-Nafe' wife of H.E. President of the university, Prof. Fatmah Bint Abdulla Al-Melhem Dean of Community Service & Sustainable Development as well as the deans of the colleges. The MOU is used as a strong tool to develop sustainable and multi-dimensional cooperation relations represented in building capabilities and localizing technology and pushing forward the development process in the Eastern Province in particular and in KSA in general. Her Royal Highness Princess Abeer Bint Faisal Bin Turki Chairperson of the Board of Trustees has praised the programs which the university has been providing to build a responsible generation contributes to pushing the process of development forward in the region and H.R.H underlined the importance of investing youth ideas complied with Saudi Vision 2030.

President of the university Prof. Abdulla Al-Rubaish has expressed his appreciation to H.R.H the Chairperson of the Board of Trustees as she honored the university by visiting and signing the memo which implies the development of seven different fields pointing out to the unique role played by the council to instill a culture of social responsibility among society individuals and the three sectors.

The Council's Secretary-General Ms. Luluwa Al-Shemri added that the fields that will be cooperatively developed are of great importance and sustainable impact if being applied in compliance with the aspirations of the wise leadership pointing out that signing of the said memo came after identifying society needs through studying the reality of the social responsibility and multiple visits to 'responsible youths' program concerned with spreading the culture of social responsibility among students. Signing the memo would be a bridge for comprehensive cooperation with the university in areas concerning youths, required initiatives, and in seeking the assistance of the university experts for the public interest of the region, the Executive-Director Nouf Al-m'ejal stated.

Signing the memo concluded with a meeting held between Her Royal Highness Princess Abeer Bint Faisal Bin Turki, the Chairperson of the Board of Trustees and IAU female officials where they discussed empowerment of women in the Kingdom. H.R.H pointed out that the empowerment of- women- and Saudis is a global system and all indicators prove that women are empowered and such empowerment is a basis for the integration of roles between men and women. Finally, H.R.H concluded that Saudi women were and still are the backbone of their families and that the quality of Saudi society is a reflection of their life's quality.